Home > Movies > Nate’s Worst Of 2014: The Biggest Disappointments Of The Year
Tweet Pin It

Every year there are tons of terrible movies. I mean, TONS OF TERRIBLE MOVIES! So many movies that I typically just like to forget about them. Actually, this year I stopped keeping a list of the bad ones because I was so annoyed by them. So, it actually took me a little while to come up with my worst of list.

I don’t really want to write about the very worst movies though. They are just crap for the most part. I want to write about the movies that I was hoping would be good and turned out to either be total garbage, just didn’t live up to the hype, or were such unbelievable step downs from their predecessors that it was just depressing. So, without further ado, here are the biggest movie disappointments of 2014! 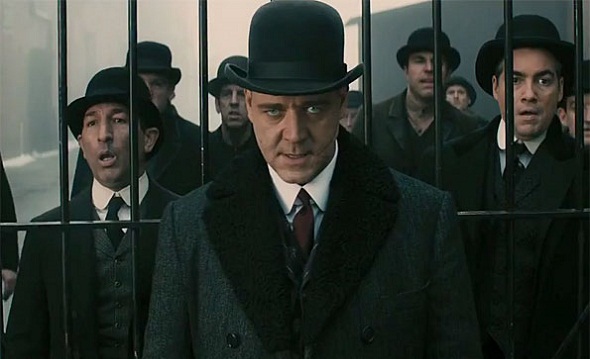 This movie is actually the worst movie I saw all year, but it’s at the bottom of my biggest disappointments because I actually did hope it would be good. I remember seeing the trailer for it and thinking “Hey, we might actually get a decent Valentine’s movie for once”. Hell no! Literally! This movie is so stupid it made my head spin. Will Smith shows up at one point, during the early 20th century, wearing a Jackson 5 shirt under his vest. Oh, and did I mention he is the devil. Russell Crowe also hams it up every time he is on screen in his worst performance ever and Colin Farrell looks absolutely lost. The longer this movie goes on the more intelligent people will want someone to shoot them.

Robert Downey Jr. is always such a fantastic actor and he does the best he can with this depressingly sagging material. This movie certainly has its moments that work, but it also has a love triangle between Downey, a criminally wasted Vera Farmiga, and Leighton Meester as what possibly might be his daughter. Wow! Then there is just the simple fact that this movie had no clue when to end. The actual series of endings made ‘The Lord of the Rings’ seem like just a warm up. At least that movie was good.

The first two of these films were pretty dumb for sure, but they were also a lot of fun. They had a number of huge action sequences that were expertly crafted by talented people and they brought together actors we all wanted to see. This one just completely dropped that ball. There are plenty of action sequences, but they all look terrible. The story is not just bad, but truly terrible! The film abandons its older cast for no reason in the middle so Barney can go get a bunch of crappy young actors. The only redeemable thing is Mel Gibson, but even he gets short changed with some truly stupid sequences. Such a disappointment. I wanted to like this one so badly. I loved the original. It was fresh, beautifully animated, and quite funny. This one could have doubled down on its best characters and utilized it’s great voices to write better songs, but instead they completely screw up everything. The whole plot is this stupid proving himself to daddy story that we have all seen a thousand times. The songs are completely unmemorable, the best characters are shoved to the side for crappy new ones, and the laughs were pretty much non existent. What a dud.

6. A Million Ways To Die In The West

This movie looked like it was going to be the funniest movie of the year. The trailer had me rolling. Sadly, those laughs in the trailer were pretty much all the laughs there were. The story is mostly an excuse for Seth McFarlane to make out with two pretty girls (Amanda Seyfried and Charlize Theron) and many of the best actors are forced into the same jokes a hundred times. Sarah Silverman’s hooker virgin is funny the first 5 times, but jokes about saving herself with semen in her hair only go so far. Then there are all the times people defecate in this movie. There is one scene where Neil Patrick Harris defecates in a hat that is a particular low for the talented comedian.

Most have placed this as the worst film of the year, but that just seems silly to me. It has stunning special effects, some expertly crafted action sequences, and a some good performances by Stanley Tucci and Kelsey Grammar. However, that does not change the fact that this is a huge step down from its predecessor. The new characters are absolutely as dull as they come, the boyfriend character seems to come out of nowhere, and the acting by young Nicola Peltz makes Megan Fox look like Meryl Streep. Then there is the stupid new score and a plot that felt like it couldn’t develop itself. I enjoyed this movie a bit more when I turned my brain off and watched it really loud, but it’s still pretty bad.

This movie actually has a lot of good in it. The performances are all really good and the movie looks fantastic. Eva Green also steals the show as one hell of a femme fatale. Sadly, this is a 4 story film with one story that works. Unlike the original, none of these stories feel like they flow together and some are just an absolute exercise in futility. The way they tack on Nancy’s revenge from the first film as a book end to another story is particularly bad. This movie ends after the ‘Dame To Kill For’ story and then sticks around for no reason. George Clooney’s movie about saving art during WWII could have been amazing, but instead it is a film in search of a tone. At some points this movie is a powerful story about some important people in history. At other moments it is a really cheesy comedy about a ‘Dirty Dozen’ group of unlikely heroes. The music is equally cheesy at times and represents Alexandre Desplat’s most scattered work. I think Clooney was trying to go for an old school style, but instead he just ends up with a tone deaf story with a particularly weak climax.

This is the one good movie on this list that is still such a disappointment that I couldn’t keep it off. As a matter of fact, this is such a step down from its predecessor that ranks as the second most disappointing movie of the year. This movie could have been an exciting close to a stellar series, but instead it’s a plodding penultimate chapter to what hopefully will be a great finale. All the wonder of the capital is gone, the chemistry between the leads is mostly gone, the beauty of the world is gone, the excitement of the games is gone, and it’s made up for with a overbearring despair in a modern day Zion. Ugh. Luckily, Jenn Lawrence is really good, characters are good, some scenes are really good, and the story is still compelling. Still, this movie was unbelievably disappointing after the first two.

Wally Pfister has been crafting great movies with Chris Nolan for years. Finally, he stepped out on his own this year with a unique story about putting a man in a machine. You add Johnny Depp into the mix and I thought this was going to be one of the years best. Sadly, it turned out to be one of the years worst. It’s not that the story is awful (although it’s a bit stupid at times), but that the plot is utterly uninspiring in a way that is hard to describe. Who could have thought it was even possible to make soldiers fighting a super computer a snooze fest. The pacing of this film is like watching asnail try to race a worm. Paint drying has been more interesting. Honestly, I would rather have watched a two hour technical lecture on transcendence than watch ‘Transcendence’.