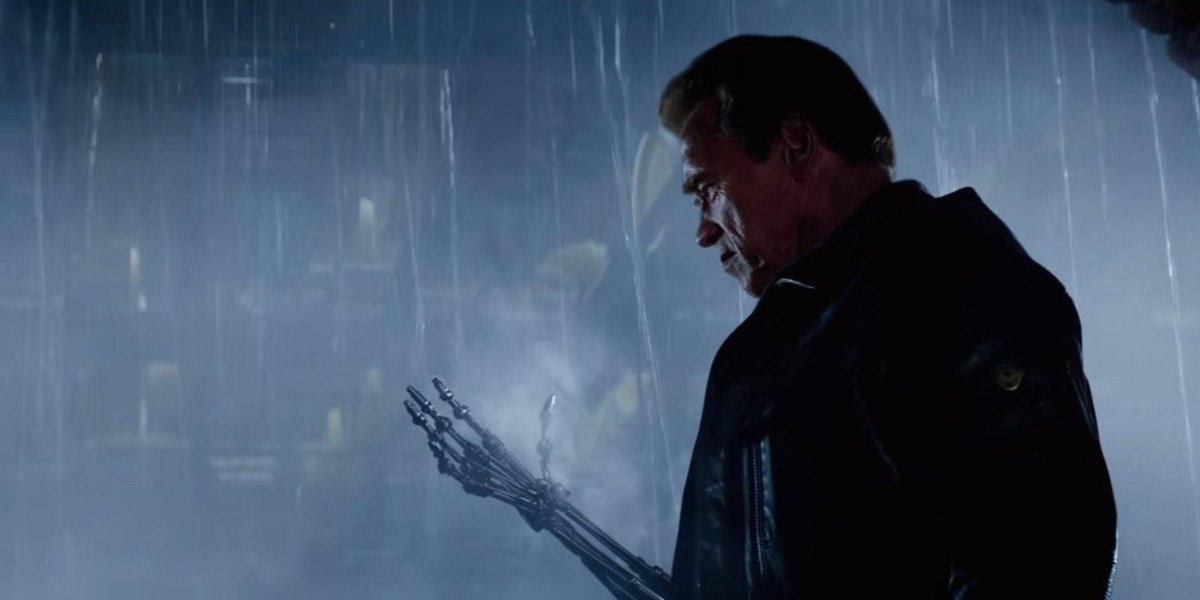 I recently read someone point out that they do not know anyone that’s a huge fan of ‘The Terminator’ as a franchise. Well, they certainly exist and I’d safely say that I’m one of those people. I have no delusions that the third and fourth movies in the franchise are great, but I certainly enjoyed watching them. I liked seeing Skynet take over in ‘T3’ and I highly enjoyed experiencing the post apocalyptic world in ‘Terminator Salvation’. They both had a number of issues if you pick them apart, but they mostly stood up as fairly entertaining continuations of great characters.

I pretty much feel the exact same way about ‘Terminator Genysis’. It’s a decent action movie that follows some very memorable characters in strikingly old and new directions. It’s a film with a number of little issues and one potentially big one that I’ll discuss a little here. Yet, it’s also a movie with some fun set pieces, very clever twists on existing characters, and an opening that every real ‘Terminator’ fan will be super excited to see.

In other words, it’s a mixed bag of a film (just like the last few), but the things that make it enjoyable mostly outweigh any issues or nitpicks. And truthfully (if I’m totally honest with you), I hope they make another sequel because I’d love to get to see these characters again. Especially Arnold as the T-800 with a heart of gold steel. This really is Arnold’s best role and it’s so cool to see him back in those familiar shoes.

The other actors don’t quite do as good a job filling in for their iconic counterparts, but they do a good enough. A lot of people have called Jai Courtney’s performance dull and without the personality that Michael Beihn had. Well, he is certainly no Michael Beihn, but he does just fine as Kyle Reese. Jason Clarke and Emilia Clarke are equally fine as John and Sarah Connor. They won’t make you forget Linda Hamilton or Eddie Furlong, but they make the characters work.

The real issue with this movie lies in its time travel and whether the changes to the timeline actually work. There is much explanation of how it might be possible that makes a decent amount of logic, but there is also one big issue involving John Connor that is pretty ridiculous and might make your brain hurt if you think about it to long. Still, the basic plot threads flow along at such a pace that most won’t fret over it. Not to mention the fact that John kind of tries to explain it in a vague way.

What really matters is the fun audiences will have with the way this movies plays with the existing movies they already know and then throws them for a complete loop. The bickering between John and Sarah, comedic pokes from the Terminator to Kyle, and the Arnold Vs. Arnold sequence are all good fun. Still, it could have been significantly less fun and I would recommend this movie for the war scenes that open it alone. If you are a fan then you have always wanted to see what happened just before the first T-800 was sent back. This movies gives you that and it’s very well done.

I also have to praise the work that Lorne Balfe and Hans Zimmer do on the score for this movie. Outside of the main theme, music has not been a strong suit in the Terminator franchise since the 2nd one and this one fixes that problem. Honestly, this one fixes a number of things that were missing from the last 2 and is certainly my favorite sequel since the 2nd. It’s not a great movie by any stretch of the imagination and has plenty of issues with tone, sub plots, and the possible hole involving John coming to the past, but mostly it’s fun and worth a watch.

Lastly, there is one thing I must gripe about. The marketing team for this movie ruined a huge surprise in this movie and I think it’s total bullshit that they did it. I won’t ruin what it is for those that have ignored recent ads, but let’s just say that the movie does the surprise quite perfectly and I would have likely been blown away by it. Instead, I already knew because of the stupid second trailer. Marketing team, shame on you.