They were known simply as “The Lost Boys.” Orphaned by the brutal Civil war in Sudan that began in 1983, these young victims traveled as many as a thousand miles on foot in search of safety. Fifteen years later, a humanitarian effort would bring 3600 lost boys and girls to America.  In “The Good Lie,” director Philippe Falardeau, (“Monsieur Lazhar”) brings the story of their survival and triumph to life. Sudanese actors Arnold Oceng, Ger Duany, Emmanuel Jal, and newcomer Kuoth Weil, many of whom were also children of war, star alongside Academy Award winner Reese Witherspoon and Corey Stoll.

I sat down with The Good Lie writer Margaret Nagle (Red Band Society, Boardwalk Empire) and stars Arnold Oceng and Kuoth Wiel to discuss life changing choices, how we can help the South Sudanese children, and much more.

I really did love this film, I wasn’t prepared for how emotionally affected I would be.  I do wish I had had some tissue.  But I have to say it was so well written, and you two were fantastic in it.

So a lot of the characters are faced with some tough choices in this movie.  What’s the biggest decision you guys have had to make so far in your life; either career wise or just a life changing decision in general?

Margaret: “Ask them because my life is just…”

Kuoth: “Um, I think that this film itself for me was a decision that I had to make.  Because at the time I auditioned for it, I was in college.  And it was my last semester. So the casting director had told me that if you’re going to do the film you’re going to have to give up school because we’re going to be filming for about two months and there’s a lot of travel in between.  And so I gave up my school taking the opportunity of doing the film because of the script itself.  Because I felt that I needed to be a part of it because this was the history of my country.  And so, knowing that I took the opportunity, obviously, hoping for the best (laughs).”

Arnold: “Same, same, exact same to me.  It was a big decision to be part of this film, a decision that I had to make.  And it has changed my life being part of this film.  It’s changed my life immensely.  I’ve learned about my people, I’ve learned about my culture.  Things I didn’t know.  Coming from my father, my father is from South Sudan and I came to the UK.  So being a refugee myself, and not growing up to know my father.  I had to be part of this film to grow and to mature into a man.  You know there’s a great saying, ‘you don’t know where you’re going until you know where you’ve been.’  And I didn’t know where my father was from or what he’s been through, or where he’s been.  So this was an emotional journey for me and a big decision, and I’m happy I was part of it.” 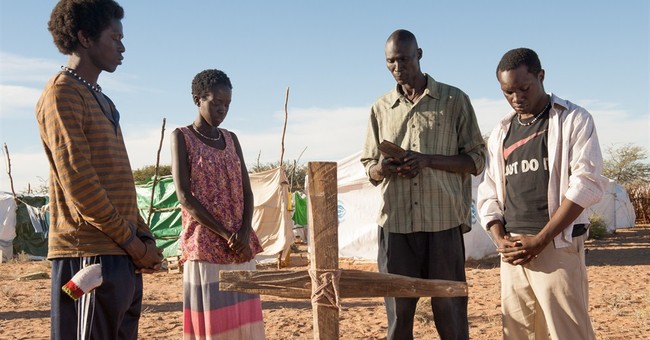 The whole time while I was watching this movie I kept thinking, I have to do something.  I just wanted to help out in some way, because the film makes you feel that way when you’re watching.  And I was so happy that you (Arnold) mentioned thegoodliefund.org because once I got home I donated…

It’s really rare that a movie can have that effect on the audience.  Is there another movie for you guys that after watching it you got inspired to help out for a good cause?

Kuoth: “I always feel like you have that effect with documentaries.  And that’s why this film was also special too.  Because Philippe has that special thing where he makes you feel like this is something that’s in a way very authentic, but it feels real to people.”

Margaret: “But I also think film is this emotional language.  It’s a language that the whole world can speak.  We can all watch a movie and get a certain value from it.  That someone in China or someone in, you know, Argentina; we can watch the same film and we get it.  We all get it.  And so I always believe that unlike a documentary, and this is what always kept me going, is I know this film can break down barriers for all of us.  It’s funny, it’s entertaining, and it’s an intimate epic.  But also that you can understand and so could someone a world away could understand it too and want to give that 5 dollars to the Good Lie Fund.  We’re asking people to think about South Sudan.  We’re going to try and make a difference.”

There’s also a lot of humor in here, too.  One of the funniest parts was when the guys were thanking God for the miracle food that is pizza.  I think pizza is amazing as well, but do you guys have a favorite food that you would also say is worthy of that title?

Arnold: “Ha-ha, yeah, I’m telling you for this film I had to loose so much weight.  So now that I’m allowed to eat the food I want, I’d say steak! (Laughs)…”

Margaret: “Steak, the ‘Lost Boys and Girls’ love steak and orange juice.  And then the Cheerios, that’s my favorite.  I’m an obsessive Cheerios eater.  And I also love; I personally feel pizza is a miracle food.  I feel like that’s sort of a universal, like everybody feels like pizza is you know?  That’s why you laugh at that.  Because you know in any language airplane food is bad, pizza is good.”

*If you would like to help South Sudanese children in crisis and Lost Boys and Girls’ communities by please donate at thegoodliefund.org