Alright, let’s get this right out in the open. I am one of the few people who gladly admit that I liked something about every single one of the ‘Jurassic Park’ films. And I absolutely love ‘The Lost World’. I have watched it a million times and honestly I don’t even care about some of the cheesy sequences anymore (I’m looking at you gymnastics raptor kick). It’s a fun movie with several unforgettable sequences. ‘JP3’ is pretty damn bad, but I watched it again the other night and still had some fun with the pteranodon sequence and a few other little scenes.

Bottom line, I am a die hard ‘Jurassic Park’ fan and it is highly likely that I would have had some fun with ‘Jurassic World’ even if it was crap. That being said, this movie is far from the cash grab many feared. In fact, this is the best movie in this series since the original knocked our socks off some 22 years ago. Sure, it has some little cheesy lines here and there. It’s also the most predictable movie I’ve seen this summer, but when the things you are predicting are exactly the things you want to see complaining seems really stupid.

Cut past all the little nit picking and ‘Jurassic World’ is the most purely fun popcorn movie you are likely to see this summer! It’s also the ultimate monster movie for a generation raised with them! From the moment the Indominus Rex leaves his cage this movies scares and spectacle are on like King Kong! Well, without the giant ape of course. What I mean to say is that you haven’t seen monster movie action like this since Peter Jackson blew our socks off a few years ago. ‘Godzilla’ was pretty good last year, but it’s got nothing on ‘Jurassic World’.

The basic plot is fairly similar to the first film if you just look at the big picture. Truth be told, it’s actually quite a bit like they mashed up the first two movies and took the pteranodon from the third for good measure. That’s if you’re just looking at the big picture. However, the subplots of this film are what make it so interesting when it’s not trying to terrify you. I especially like the whole thing with Chris Pratt’s character (Owen Grady) teaching the raptors. It’s something that could have easily gone wrong, but they play it out in a way that creates tension and excitement. There’s also some old school ‘JP’ metaphors about messing with things we don’t understand in there. Deep stuff? Not really.

The main plot thread involves a character named Claire (Bryce Dallas Howard) and the genetically altered Dino she is trying to get ready to sell to a general public. You see, it turns out that said Dino isn’t just scarier looking than a T-Rex, but is actually a total killing machine. It’s not just interested in eating. No, it is a vicious hunter that will stop at nothing to get its next kill. Which makes ‘Jurassic World’ the ultimate playground for an overgrown serial murderer. Yay! Sounds great! Right?

It is actually great fun to watch the Rex track down one person or Dino after another and a lot of fun watching these characters try to take him down. I think everybody in this movie is quite good. Once Claire and Owen get over their differences, it turns out that they have great chemistry. It’s very entertaining to watch them fight a flock of pteranodon together and live to tell the tale. Their dynamic also provides the movie with occasional good humor. 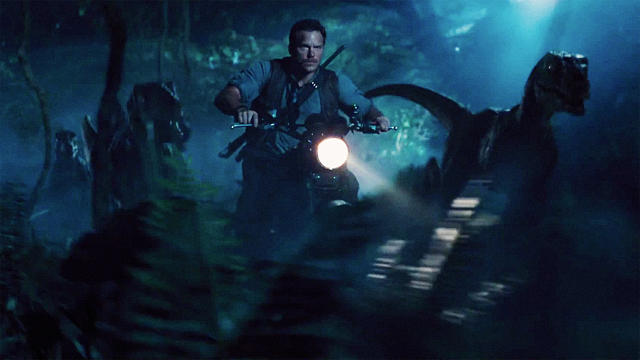 It wouldn’t be a ‘JP’ movie without kids in peril and the ones in this movie are much better than the ones in any of the other movies. Tye Simpkins and Nick Robinson play Claire’s nephews and they provide the movie with a much needed perspective. Children’s perspective. There are kids in every one of the ‘JP’ movies for a reason. Kids are the target audience for a theme park like Jurassic World and these movies need to give us a view of wonder from their perspective before chomping us into bits.

Their are so many things to love about this movie that it’s best to just sit back and let the ride take you in. Sequences of raptors riding with humans, pteranodon attacking the main park in epic fashion, and the Rex attacking a gyrosphere are just a few of the things this movie has in store for you. Yet, it’s the brilliant final battle that will have you talking all the way home. I won’t ruin it, but I will tell you my son cried from pure joy and the audience clapped like I haven’t seen since Hulk smashed Loki around in ‘The Avengers’.

If you are a fan of ‘JP’ and you don’t see this movie then you are missing out on the ultimate ride! This may not be the smartest or the best written movie you see this summer, but it will certainly be the most sheer fun! So, take a trip back to Isla Nublar and discover what you have been missing all these years. The park is open my friends and dinosaurs are waiting……to eat you alive.

BONUS FEATURES EXCLUSIVE TO Blu-ray:
WELCOME TO JURASSIC WORLD: An in-depth take on the creation, look and feel of Jurassic World. Director Colin Trevorrow and Steven Spielberg discuss how the idea of the film came together and how the casting was decided with actors’ commentary on their roles and filming locations.

INNOVATION CENTER TOUR WITH CHRIS PRATT: Chris Pratt gives a tour of the Innovation Center, a museum/exhibit, built just for the movie.

JURASSIC’S CLOSEST SHAVES: Clips from all films in the franchise showing “near death” or extremely scary encounters with dinosaurs.

DINOSAURS ROAM ONCE AGAIN: Behind the scenes look at the making of Jurassic World’s visual effects, how the dinosaurs came to life, and actors filmed scenes.

CHRIS & COLIN TAKE ON THE WORLD: Chris Pratt and Colin Trevorrow (Director) interview each other and discuss Jurassic World as well as the other Jurassic Park movies.