It is quite amazing to see how far this series has come. A little over a decade ago you could not have paid me to watch one of these films. The first one was entertaining, but never struck me as something to spawn countless sequels. The first couple of sequels seemed to prove my theory. Then Vin Diesel and Michelle Rodriguez returned for the fourth film and it has been all uphill from there.

However, it was the addition of Dwayne Johnson to the bunch and a newfound emphasis on ridiculous stunts that truly helped this series kick it to another level. The first four films might as well have just been and overlong prologue for the in sanely superior last two films. Films that gave us stunt sequences we have and will be talking about forever. I mean, who can forget the flying safe or the never ending runway.

Well, you can add another couple sequences to that list after the latest entry and you can add something else that has not been present yet. Tears. That’s right people. You just might cry when this is all said and done. Of course, I’m referring to the infamous send off to the late Paul Walker. As many of you know, the actor died halfway through the making of this film and a lot of money was spent to complete his role. In fact, they did such a good job with the CGI version of Paul that they may be able to keep his character.

I’m just kidding about that. What I’m not kidding about is the tremendously done and emotionally resonant ending they tacked on to this film. For fans of the series, this is absolutely the perfect way to say goodbye to his character. More importantly though, his family (real life and his FF family) have the most expensive and everlasting tribute that I have ever seen on the big screen. Truly, the Academy Awards ‘In Memoriam’ section has nothing on this. 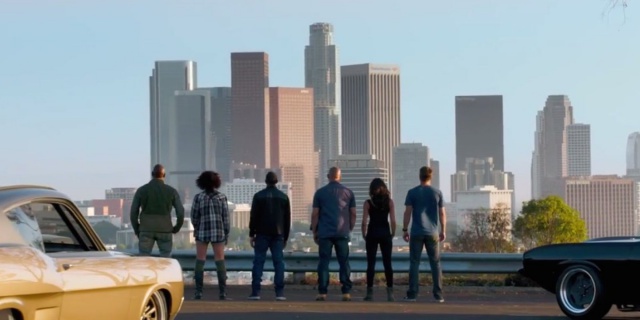 Okay, I know what you are thinking. What about the story? Well, it’s pretty damn ridiculous, but enough fun that you won’t care. If you saw the last film then you know that it ended with Jason Statham killing the character Han in Tokyo. It turns out that Statham is Deckard Shaw. In other words, he is the brother of the bad guy in the last movie and he wants revenge. So, he blows up Dominic Toretto’s (Vin Diesel) house and it’s on. From then on, the movie plays like a duel revenge flick.

There has to be something else to get Dom and his team to jump out of planes and between buildings. Well, there certainly is and it involves a secret government agent, played by Kurt Russell. I could tell you the details of their mission on how Dom fits in, but the trailers have kept this a secret and so I’m going to do the same. Let’s just say that the fact they are coming to Dom is quite ridiculous and if this movie wasn’t so much damn fun then it might be offensive to my brain cells. Instead it just turns out to be an excuse for some of the most exciting stunts in movie history. So, I can forgive it.

Bottom line, if you liked the last couple of these movies then you are going to love this movie. If you are a big F&F fan than this may be the best movie ever made for you. Everyone else, you are still in for quite a lot of fun. You might not understand what the hell is going on and why, but you will still have a blast. So, strap in and get ready for the biggest action packed ride so far this year!

In stores on Tuesday, September 15.